Something for My Second Child

Just as most photo albums have more photos of the first-born than any other children, I suspect first-borns also get more words devoted to them. They have an unfair advantage–ask any younger sibling. First off, they’ve been alive longer, and usually they’re the ones who make childfree people into parents, which is kind of a big deal.

The next child makes for a transition that is a little harder to document. I’ve heard it said that the first child makes a parent, the second child makes a family. As my mom’s only child, allow me to say that this is crap.

However, going about your rounds with two kids in tow is quite different from being the young, hip couple who totes along an adorable baby in pristine, expensive mini couture wherever they want. The second child comes along and you are older, you’re more tired, and the hand-me-downs that survived are more stained. You enter into what we came to call The Fog of the Second Child, which took us a solid two years to get out of–and only then did we realize we had been in it. This is a time of life to get through, not a series of baby-bookable milestones.

I don’t know if there is a consistent personality profile for second-borns, but ours seemed determined to let us know that four years of parenting her sister were totally inadequate preparation for her: 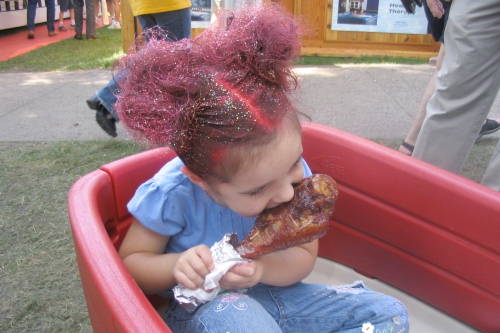 I cannot guarantee the origins of this State Fair turkey leg

The spa birthday party of a 10yo’s dreams

I could go on, but what I’m realizing as I make this list is that if Victoria threw us into a fog when she was born, she was also instrumental in bringing us, me, out into the world not long after that. She enjoys Tinkerbell, My Little Pony, and Taylor Swift without an ounce of worry about whether they are feminist, edgy, intellectual, or cool. She asks the neighbors about vacations and flowers that I didn’t even know they had. She remembers injuries and asks if they’re better, and she makes get well cards for her friends.

One of the hardest things for me to adapt to was her love of holidays and birthdays, things I can hardly remember, let alone plan for. Her birthday hovers around Mother’s Day each year, and as usual I am unprepared, while she has been making plans for months. She tells me about clothes, decorations, treats, and games, while I try to remind her that last year was a great big party–in celebration of turning double digits–and that we agreed at the time that we wouldn’t be able to repeat something so elaborate next year.

“I can still have streamers, right?” she says, “and maybe balloons?” She asks so little it is almost embarrassing that I sometimes struggle to provide it. But after eleven years she has taken us pretty far.

A few years ago I finally caught on that even the smallest recognition of Valentine’s Day, St. Patrick’s Day, Baby Squirrel Day (don’t ask), Pi Day, or my birthday would be enough to satisfy her, and that has made all the difference. If I don’t think of some small thing I’d like on Mother’s Day, she’ll be distressed no end, so I hold off on buying some fancy shampoo, knowing that a trip to the Aveda shop will indulge her love of cosmetics and perfumes as much as it will relieve her need to do something on a day that I’d be otherwise content to let slide by unnoticed.

I sympathize with my friends who have a hard time on Mother’s Day. Some had horrible, cruel mothers, some had wonderful mothers who died far too young. Some people just don’t like a fuss on any day, especially a fuss with them at the center.

In this house, however, we’ll mark the day at least a little. When I’m sniffing my Shampure and eating my strawberries, I will of course be grateful to my husband and my first born, without whom I would not be a mother. But I will reserve a little extra thankfulness this year for my second, whose love of the wider world is a continual source of surprise for me, and it is very nearly contagious.