Could it be a sign of perimenopause that just seeing that Studio
Ghibli logo in the opening credits of a movie makes me tear up?

Or is it just a symptom of the period of parenting we’re in, our girls
still childlike but obviously older, older, OLDER every day?

Not too old (never too old?) to look forward with great excitement to
The Secret World of Arrietty, another Ghibli film with a brave and
resourceful female protagonist, beautiful attention to visual detail,
and a gentle spirit from beginning to end.

There are so many things I love about earlier Ghibli films that are
present in Arrietty, which I will try not to spoil here. I love the
magical realism, the way the natural world is realized with such
loving precision that the magical elements—the little people, the cat
bus, the bath house of the spirits, the creaking house of Howl—seem
real too.

I love that there are girls at the center, that every Ghibli movie I
can think of passes the Bechdel test. I love the friendships that
don’t quite rise to the level of romance but are still true love.

I really love looking over at my girls in the dark theatre and seeing
them already looking back at me with big grins, silently communicating
“Isn’t this awesome?”

When I saw a scene in which a character moved in and out of a shaft of light, a number of times, it was like hearing a musician enjoying the opportunity to play a particularly beautiful passage, adding grace notes to the repeated sections, and I could feel my older daughter, next to me, watching.

She is nearing 13, already taller than some of my adult friends, and she sits in the movie seat with her animal hat, her Taylor Swift t-shirt, her Ugg boots, every inch a young teen. She had just told me the day before that she wanted to learn how to create light effects in video games, so I know she was watching that shaft of light doing something in that artist brain that is nearly inaccessible to me. 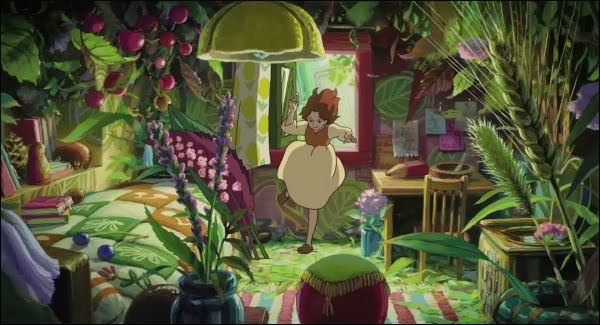 I wanted to go home and redecorate the attic just like this.

While she was at a sleepover later in the week, our younger daughter demanded to watch Totoro again, and soon afterwards we watched Spirited Away. We’ve always said she’s just like Mei, and she has embraced that image for herself.

In those movies too, the world is a magical place but nothing is more magical than clear water, tall trees, or a fresh ear of corn. No world is more beautiful than the natural world, but, Miyazaki seems to say, it takes a child’s eyes to see it.