Change is coming in our house, but we’ve managed to blithely meander through most of the summer either too busy or too relaxed to think about it. But it crept in a little today.

This is one week when neither kid has a camp, a class, a veritable summer school self imposed by repeatedly ignoring spring deadlines (but I’m not bitter). We aren’t going anywhere, and no one is visiting. Just a week to chill together.

Chill. Like by eating lots of cold stuff packed with sugar.

Excited by the prospect, 11yo Victoria tries to initiate activities with her older sister, but 15yo Violet wants to read, write music, text friends, and draw. Kinda solitary activities.

So Victoria finally says, tentatively, during lunch, “We could role play.”

And Violet says, calling out from her reading position on the couch, “Nah, I think I’m too old for that.”

Those of us still sitting at the table are silenced, and a gloom settles over the cold fried chicken.

We eat without speaking, deep in both nostalgia and clouded projections of the future. I don’t know what Victoria is thinking, but it feels like we’ve all taken a step that we can’t take back. “Role playing”—pretend games, living utterly in a fantasy world for days at a time, whatever you want to call it—was the basic stuff of my kids’ childhood, but especially Violet. There were times at the dinner table when she seemed literally unable to stop, to come back to Earth and be herself, whoever that was. I suspect that from ages 7 to 9 she spoke in a British accent more than half the time.

ABC — Always Be in Character

If you Google around you’ll see that drama and pretend play are supposed to peak at about 5 years, but I’d say for Violet it was more like 12. I know what’s “normal” because her fantasy realms and invented characters and identities were so real to her I took to books and Dr. Internet to see if there was something wrong.

Though I also remembered that my little sister, possibly into the double digits, wanted to be a bunny when she grew up. Maybe it’s hereditary.

By age 14 it had cooled down, but it had definitely not gone away. Still, it’s a little harder to role play when your friends are 14. And now, it may be done. This seems normal and healthy to me—especially knowing it is all channeled into notebook upon notebook of character sketches and story ideas. And there’s always D & D. I can sigh and move on, but I notice Victoria across the table–nearly under the table–with a dark expression on her face.

We go outside to talk, and she starts to sob in her open, earnest way. Never one to hide her face or swallow tears, she lets her feelings gush forth like a fire hose. I brace for it, and she tells me that she knows that her older sister is only going to keep growing up and away. Three more years and she may be gone. She leans forward in the patio chair and tells me wide-eyed that she’s afraid she’s losing her sister.

One year ago: still not too old to go everywhere in partial costume

I’m stuck. I can only tell her the truth. First, I didn’t grow up living with my siblings every day, so I can’t honestly say I know what she’s going through. But more than that, I can’t tell her she’s wrong. I tell her about adult friends of ours who remain very close to sisters and brothers, I tell her that siblings don’t have to see each other frequently or even talk frequently to stay one of the most important people in each other’s lives. I make the mistake of starting to say that I too feel sad when I think about my girls growing up, but this threatens to transform the mild weepiness I feel watching my girl cry into big, ugly, personal tears. I stop.

Thankfully, I don’t say what is on the tip of my tongue, which is, “You sure gotta lotta nerve, girl.” Victoria is the one leaving us first, after all, to go to school. 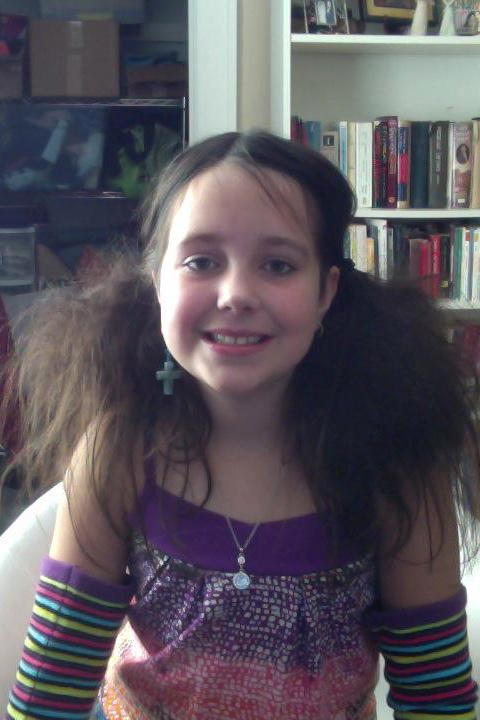 Girl with nerve — Exhibit A

We’ve been homeschooling for nine years. My first homeschooling blog, on homeschool blogger, is so old it’s disappeared. But my 11yo wants to try something new, admittedly in part because the 15yo is growing up and away. Homechool is less of a family venture than it used to be, and more of a solitary pursuit, and that’s a change that hasn’t been sitting well with my socially oriented girl.

We’re all mostly excited for her. To tell the truth, I’m mostly excited for me, too. Mostly, I am looking forward to giving a little TLC to my own work. Mostly, I’m happy to step back from the co-ops and playdates, despite the great people I’ve met and the friends I’ve made. And mostly I am not letting myself think too hard about the rest of it: the guilt over not sticking with it (we could always come back!), the worry that middle school is the worst time to dive in to classroom-based education, the suspicion that were she given to a more extraverted family she’d be a natural-born unschooler, the certainty that no public school language arts program could ever satisfy me.

Victoria, on the other hand, is already thinking about planning a dance and having a party for all the new friends she’s going to make. Like I said, she’s sure gotta lotta nerve. Good for her.

Our conversation ends with Victoria taking a deep breath and saying to herself confidently, “I know we’ll always be friends,” before going inside to slice more watermelon. She sighs and moves on, and I try to clear the sadness now shading my face as I follow her, always just a little further behind.

Oops, no, sorry. Changed my mind. We’ll always be together just like this.